Find a comfy place in your home to gather together as a family. Grab some snacks, grab your Bible, and get ready to make a moment of it!

Start off by having each person take a turn discussing the following prompt:

Has there ever been an earthquake where you live? What did it feel like?
If not, what do you think it would be like?

Today, we're going to learn about a time when Paul and Silas were in prison and an earthquake happened!

Let’s get into a time of worship! Take a moment to stand/ stretch and then go ahead and play some worship music in your home. Have fun with it! Raise your hands, jump, close your eyes – engage in the worship moment as a family. It is special.

Big idea:
I can choose the door that leads to faith.

“Have you never heard? Have you never understood? The Lord is the everlasting God, the Creator of all the earth. He never grows weak or weary. No one can measure the depths of His understanding.”
Proverbs 3:5
‍

Paul and Silas were missionaries for Jesus. Does anyone know what a missionary is?
They travel all over, walking or riding on donkeys, telling people about Jesus. They told many many people about Jesus some were very happy to hear and others were angry because they liked being evil and knew by what they were told that Jesus would forgive them and they would become nicer and they didn't like that idea at all.

One day a man got very angry at what Paul and Silas were telling the people and had them arrested, beaten and thrown in Jail. The jailer was told if these bad guys (Paul and Silas) escaped, he would be killed. So he locked their feet in stocks, does anyone know what stocks are? They are heavy bars that go across your feet and are locked so you can't move.Now their ankles hurt their backs were bloody and hurt from the beating, they were cold, hungry and sad they were in jail.

But do you know what they did?
They prayed and sang songs to God, because they loved HIM and knew he was there with them even if they were not in their favorite place. Do you know God is with you even when you are sad or scared?All the prisoners could hear Paul and Silas singing and praising God and the jail keeper fell asleep.

All of a sudden an earthquake, a really big earthquake happened. Their chains fell off their feet were freed and the doors of the prison open. The jailer woke from his sleep and held out his sword to stab himself when Paul and Silas said we didn't run away don't kill yourself. The jail keeper was surprised and knew the reason they were so kind is that they knew Jesus.He asked how might I know HIM. Paul and Silas were very happy to tell him all about Jesus and the Jailer ask HIM into his heart. Then the jailer took Paul and Silas to his house cleaned up their wounds, and fed them. Paul and Silas told the jailers family about Jesus and all of them got saved also.

Isn't that a wonderful story because Paul and Silas loved Jesus and trusted Him,
the jailer and his whole family will live forever with Jesus too.

Let's watch the video below!

Why were Paul and Silas in prison?

How do you act when bad things happen to you?

What were Paul and Silas doing in the jail at midnight?
‍(praying and singing hymns)

What happened next?
(an earthquake rattled the prison, opened the doors of all the cells, and broke the chains off their feet)

‍Why was the jailer worried?
(he thought all the prisoners escaped)

What did the jailer ask Paul and Silas?
(how to be saved)

Where did the jailer take Paul and Silas next?
(to his house, where his whole family believed and were baptized)

THIS ACTIVITY WILL HELP US UNDERSTAND THAT WE CAN CHOOSE FAITH.
‍ 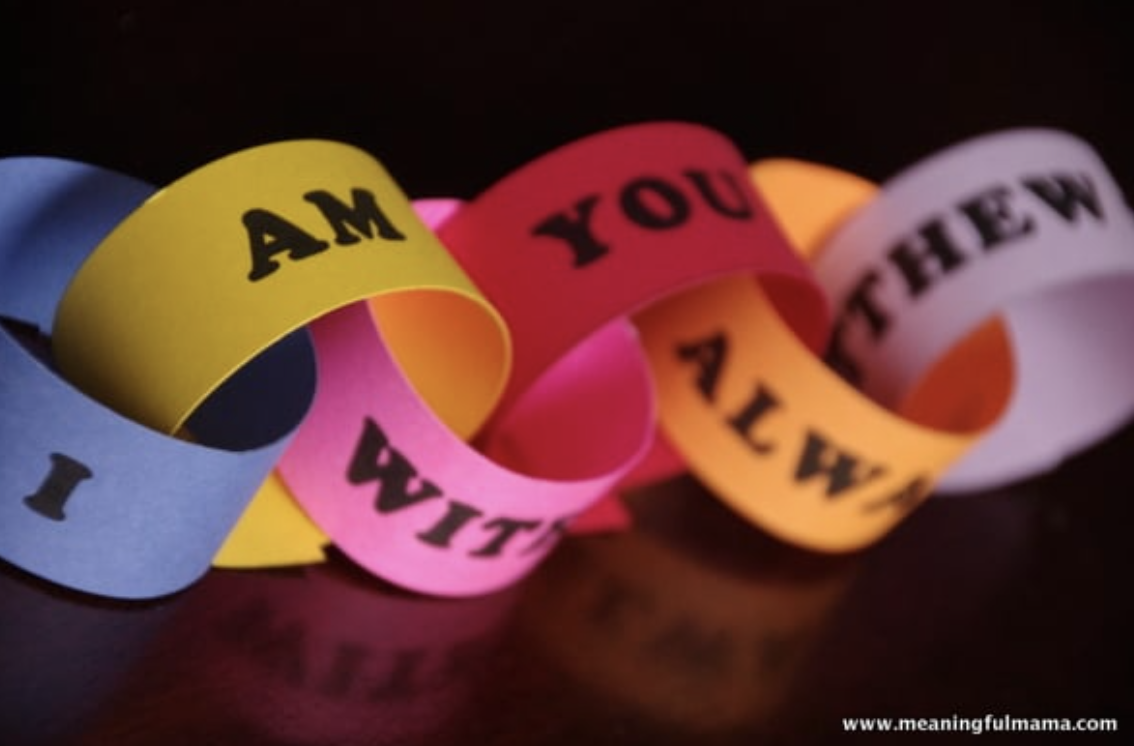 "When he received his orders, he put Paul and Silas deep inside the prison.
He fastened their feet so they couldn't get away."
Acts 16:24

Supplies: paper cut into strips or print the document below.

Instructions:
You will want to print these on six different colours of paper.
The next step is to cut out all of the strips.

This chain is meant to be a scripture reminder – “I am with you always.” Matthew 28:20.
Although Paul and Silas were imprisoned for their bold proclamation and teaching of Jesus,
I know they were holding onto the truth that God was with them.
This is what caused them to rejoice.

Tape or staple each paper chain together.

Now you have a paper chain to remind you of the story of Paul and Silas!
Even though these men were in chains for preaching the gospel of Jesus, they continued to praise God
because they knew that God was always with them.

You did it! You just took a deep dive into God’s Word – together! Let’s take time now to talk to God.
Ask your child to share things they’d like to pray about.
Write down their prayer requests and then pray together over each request.

Dear God,
Thank you  God for loving us and knowing us by name. Help us to share the love of Christ
with one another, especially those who struggle or are less popular.
Thank you that you give us the Holy Spirit to share the good news with others. We love you!
In Jesus' Name
Amen