Find a comfy place in your home to gather together as a family. Grab some snacks, grab your Bible, and get ready to make a moment of it!

Start off by having each person take a turn discussing the following prompt:

Let’s get into a time of worship! Take a moment to stand/ stretch and then go ahead and play some worship music in your home. Have fun with it! Raise your hands, jump, close your eyes – engage in the worship moment as a family. It is special.

Big idea:
I can choose to make the right choice.

“Have you never heard? Have you never understood? The Lord is the everlasting God, the Creator of all the earth. He never grows weak or weary. No one can measure the depths of His understanding.”
Proverbs 3:5
‍

The story of Samson and Delilah teaches us that if we let pride get the best of us, we will fall. A mighty family of lions is called a pride. A pride of lions can be dangerous, but so can the pride in our own lives. If we don't control our pride, we are in for a mighty fall.

Let's watch the video below!

Summary: Samson was chosen by God to lead Israel. He was given unbelievable strength to use as a weapon against Israel’s enemy, the Philistines. For many years, the Israelites lived without fear of the Philistines. They had Samson to defend them, and Samson defended them with a vengeance. The trouble was Samson became too proud. He believed in his own strength more than he believed in God, who gave him his strength. Samson was told from a young age that God had commanded him to never cut his hair. Samson let Delilah do the one thing that was forbidden, and that’s why the mighty Samson fell.

Who gave Samson his strength?

Who convinced Samson to give up the secret of his strength?

How did Samson lose his strength?

How can we keep ourselves from being pulled down by pride?

THIS ACTIVITY WILL HELP US UNDERSTAND THAT WE ALWAYS HAVE A CHOICE.

To make Samson's hair, you need one sentence strip and 2 9x12 sheets of black construction paper per child. Staple sentence strip to fit your head. Then cut slits up the black paper leaving about 1 inch solid at the top. The more slits you cut the more hair Samson will have. After you are done cutting the slits to make hair, staple the black to the sentence strip. Staple in the 1 inch border at the top of the black and make sure that the bended part of the staple is on the outside so that it will not get caught in the kids real hair. Leave about 1/3 of the sentence open at the front for face to show thru. 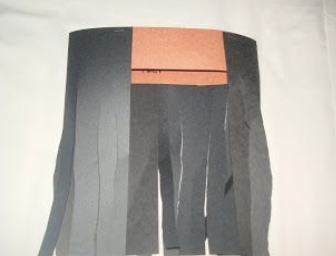 Let’s take time now to talk to God.
Ask your child to share things they’d like to pray about.
Write down their prayer requests and then pray together over each request.

Dear God,
Forgive us for our pride and thinking we can make it on our own.
Teach us to be humble and always submit to you. We love you!
In Jesus' Name
Amen